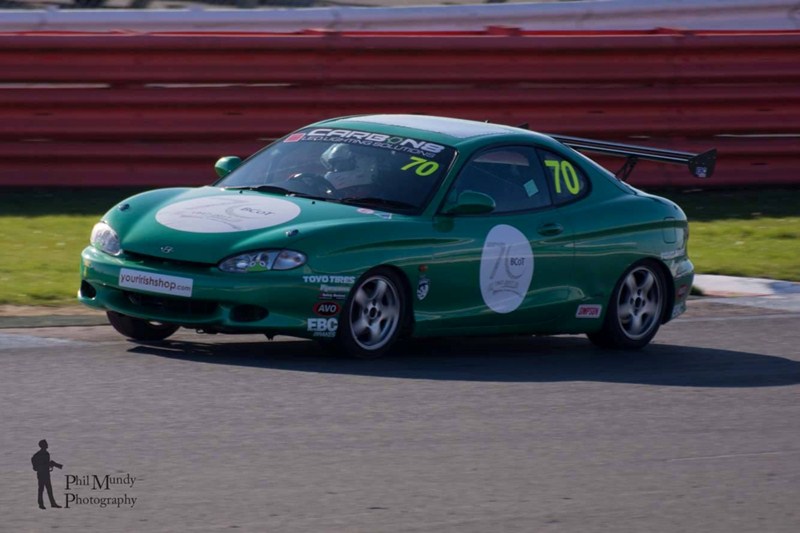 I arrived early on Friday to test the car for the first time and as I pulled into the paddock I could see that Dave and the students had already arrived and unloaded the car. The car looked absolutely fantastic and very well prepared. Before the first session Dave got the team to work, checking things over and just making sure we were ready for our first time on track. Jon Winter, the series organiser came over to give us some encouragement, he was very complimentary about the work the team had done in preparing the car.

We headed out for the first test session and this was a real eye opener. I had never been on track in a front wheel drive car before, so I wasn’t quite sure what to expect. However, the car was the most compliant, very simple to drive, totally adjustable and predictable with huge levels of grip. It also ran without an issue and was very easy to set consistent laps in. On return to the paddock, the team immediately set to work checking the car over and asking me for feedback on how it had performed. I had a chat with another Hyundai Coupe driver who was also new for the season and we both said what great cars they were.

There were two more sessions for the day and they went pretty much as before. Dave ensured that the team all got involved and had plenty to occupy them and they worked on the car with immense enthusiasm.

Once again I got to the track early and the team were already working, they certainly didn’t look like they’d only got two hours sleep because of the arctic night time temperatures at Silverstone! The first task of the day was to get the car down to scrutineering and ensure we were ready for the track. Dave spoke with our scrutineer who agreed to give a run through of what he was doing so the students would gain a full understanding of what kind of thing is checked at this stage. The first thing checked was the brake lights - this is when disaster struck as the brake lights weren’t working! We knew they had been working on Friday, as the students had been comparing braking points into Copse. Fortunately everything else was fine and again the scrutineer was very positive (by their standards) about the presentation of the car, we just needed to get the brakes sorted and we’d be out.

The team set to checking for loose connections, but it seemed like none of the usual things were the cause. Time was now ticking by before the qualifying session and the team were to get their first taste of working under real pressure to get the car ready in time. Fortunately, Dave and the guys were able to work their magic and get the car ready with minutes to spare - stressful, for the team but undoubtedly a huge learning experience and a great success in overcoming adversity.

Qualifying went smoothly and the car performed without fault; however, it soon became apparent that the car was struggling in a straight line relative to the other cars. In the end we qualified last, just a little off the pace. We had weighed the car the day before and knew we were overweight (the minimum weight is 1125kg with driver, we were coming in at 1199kg) so there was room for improvement here and we were also told that the standard exhaust would be costing us a few bhp. With the cars so evenly matched every little bit would help, the cars from 2 to 11 were separated by only 1 second.

Race 1 went without a hitch and we made one place up due to a retirement. Before race 2, Dave set the team to work, trying to strip some more weight from the car, we knew there were marginal gains to be made here but everyone rolled their sleeves up and got stuck in. The car undoubtedly felt a little quicker in race 2, although remained just off the pace of the pack in front. Knowing we were off the pace, I was able to play with the car a little and learn just how to drive it. Once again the car performed fantastically and showed just what a solid platform it is.

We qualified last and finished last in both races; yet it was as far from a bad weekend as it was possible to be. The car is a very solid dependable car and a great platform for the season ahead. We know what to do to improve it for the next race and the team learnt a lot from this experience. The students showed they are capable, enthusiastic and willing, and the rest of the paddock were full of praise for all we achieved. Overall it was a fantastic weekend, enjoyed by all involved and above all, the car came home in one piece. Roll on Snetterton in 6 weeks’ time.

Find out more about our automotive courses starting September.