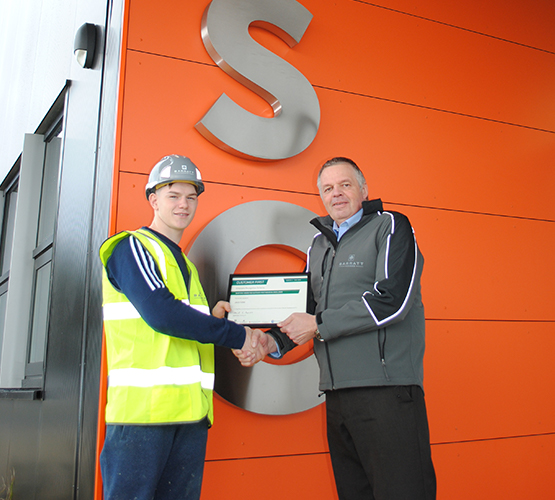 Bordon teenager Jack Ford has had an award-winning start to the year after being named Apprentice of the Quarter by Barratt Homes.

The BCoT construction apprentice has been selected by the five star house builder as the best in his field.

The accolade has landed Jack, 17, additional responsibility as a mentor to peers at Barratt’s New Quarter development in Bordon.

Currently Jack is training at the Future Skills Centre to become a fully qualified carpenter and joiner.

Jack started his journey at nearby Mill Chase School and excelled during construction workshops held with the school as part of Barratt Homes’ educational program.

Since then Jack has gone from strength to strength and is now focused on finishing his training and helping to build homes in the town he has grown up in.
Barratt Homes community liaison manager, Anthony Dimmick, saw Jack’s potential at the workshops and encouraged him to apply for the apprenticeship.

“Jack’s developing a great set of skills and we’re delighted to have him working and learning on our new Bordon development,” said Anthony.

“His enthusiasm and willingness to help others has made him a stand out student – he’s now at the stage where he can mentor others doing work experience.”

“His work as a mentor to current students, while they complete work experience has been a tremendous help. It’s given them the confidence to be part of Barratt’s team when they are on site,” Steve added.

Find out more about the Future Skills Centre and apply now.