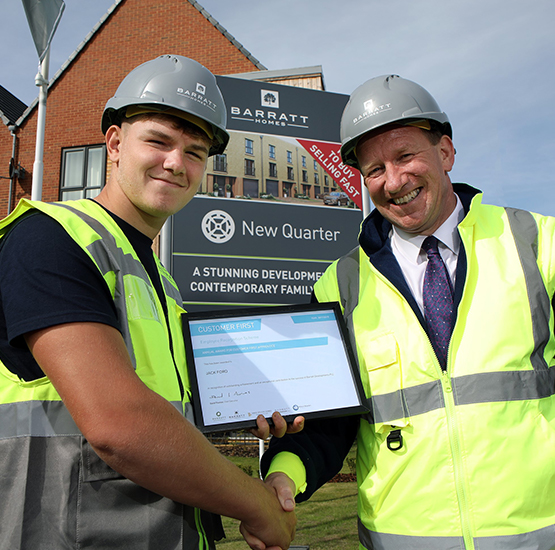 Bordon resident Jack Ford has been named ‘Apprentice of the Year’ by Barratt Homes, after a successful first year studying at the Future Skills Centre (FSC).

As part of his apprenticeship Jack has been working at Barratt Homes’ New Quarter development at Louisburg Barracks, which is situated next door to the Future Skills Centre in Bordon.

On receiving his award, former Mill Chase Academy student Jack said: “It feels amazing to win the award, especially with the competition being so high.”

This is the second award Jack, 17, has won since he joined the Future Skills Centre. In January 2018, Jack was named the Apprentice of the Quarter by Barratt Homes after an impressive start to his apprenticeship with the company.

Steve Gilder, manager of the Future Skills Centre, said: “Jack’s work as a mentor to current students, while they complete work experience, has been a tremendous help.

“It’s given them the confidence to be part of Barratt’s team when they are on site and I think he sees a lot of himself in the students he talks to. We’re all very proud of Jack and know he thoroughly deserves this award.”

Jack was presented with his award by David Thomas, group chief executive office of Barratt Developments, who visited Jack on site at the New Quarter development.

Barratt Homes’ community liaison manager Anthony Dimmick said: “Jack’s a shining example of a Barratt apprentice and we are all very proud of him. His enthusiasm and willingness to help others has made him a stand-out student and I see a bright future ahead for him.”

Find out more about studying construction at the Future Skills Centre in Bordon.