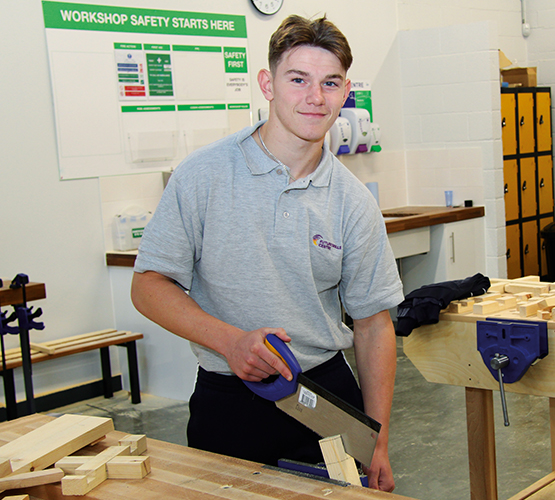 A Basingstoke College of Technology (BCoT) student was recently honoured at the House of Commons, for his achievements as part of his apprenticeship with Barratt Homes.

Jack Ford, who is studying his apprenticeship at BCoT’s Future Skills Centre (FSC) in Bordon, was named a runner-up at the Young Builder of the Year Awards earlier this month.

The event, organised by Youthbuild UK and hosted within the House of Commons, celebrated young people who are excelling in the construction industry and encouraging young people to study construction. Jack described the event as “an amazing day”.

Jack, 18, joined the FSC from local secondary school Mill Chase Academy and started his apprenticeship with Barratt Homes after taking part in workshops with the company previously.

As part of his apprenticeship, Jack is now working at Barratt Home’s New Quarter development in Bordon, which is located next door to the FSC.

After presenting Jack with his Apprentice of the Year award, Barratt Homes’ community liaison manager Anthony Dimmick described Jack as “a shining example of a Barratt apprentice and we are all very proud of him. His enthusiasm and willingness to help others has made him a stand-out student and I see a bright future ahead for him.”

Opened in September 2017, the Future Skills Centre in Bordon offers a wide range of specialist construction courses, designed to meet the needs of employers in the construction industry.

The £3.8million facility, commissioned by Hampshire County Council, is part of the regeneration of Whitehill and Bordon and gives young people the opportunity to learn a trade, gain professional qualifications through our links with Solent University or get the skills needed for a career in the construction industry. Find out more about the Future Skills Centre and apply now for September.