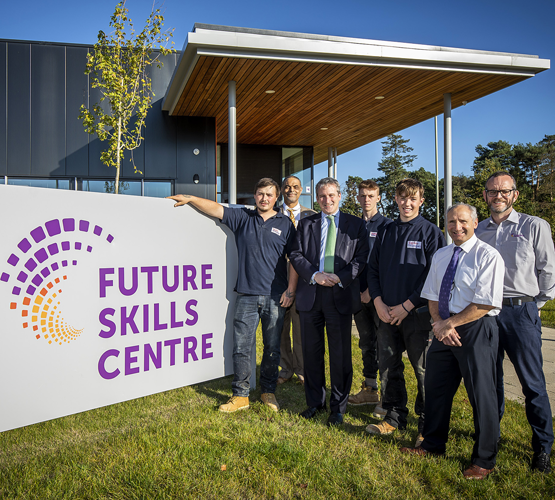 A visit from Secretary of State for Education, the Rt Hon Damian Hinds MP and Basingstoke MP Maria Miller has put Basingstoke College of Technology (BCoT) at the heart of Colleges Week 2018. BCoT, and colleges across the UK, came together this week for the national campaign which highlights the invaluable work colleges do with learners, businesses and local communities while also calling on the government and the Secretary of State for Education to start giving colleges fairer funding.

Commenting on his time with the ministers which included a tour of BCoT and the college’s multi-million pound Future Skills Centre at Bordon, Anthony Bravo, BCoT Principal said: “Despite experiencing a decade of funding cuts, colleges continue to play a vital role in the education and training of young people. Further education is key to the education system which trains 2.2 million people per year, yet all too often we come second to schools and universities. Funding for 16 and 17 year olds has not increased for seven years and colleges now have to deliver maths and English to this age group. For 18 year olds our funding has been cut by 17.5% and again we have to deliver English and maths resits. Core funding is now at unsustainable levels and is not without impact on curriculum choice, teaching hours, staff pay and learner support. It’s time to give colleges fairer funding and equal parity.”

Colleges Week is an annual campaign organised by the AOC (Association of Colleges). The theme for 2018 is ‘Love Our Colleges’ which aims to highlight the funding issue which also includes a 24% drop in funding when a student reaches 16, an overall FE funding cut of 30% between 2009-2019 and an 8% disparity between per-student funding for colleges and secondary schools. The campaign also calls for equity with regard to pay and pensions for college staff where teachers, on average, earn a third less than teachers in schools.

A round-table discussion which included the Secretary of State for Education, Anthony Bravo and Julian Gravatt, Deputy Chief Executive for the Association of Colleges at the Future Skills Centre, also included the disparities between colleges and academies which has seen a lack of funding and investment in colleges while academy capital requirements are fully funded. Colleges are hit doubly hard as, unlike academies, their expenditure is subject to VAT meaning everything costs a college 20% more than an academy.

During his time at BCoT Damian Hinds was given an insight into the transforming work colleges can achieve with sufficient investment. A tour of the college’s Future Skills Centre in Bordon (a fully funded project supported by Hampshire County Council and the Local Enterprise Partnership) illustrated how further education is filling the skills gap in the construction industry while supporting the local Bordon and Whitehall Regeneration Project. Having this industry-specific facility has enabled BCoT to tailor a new 14-16 provision which includes work with local schools, develop new apprenticeship partnerships with employers such as Taylor Wimpey and offer work in the community for student enrichment activity. 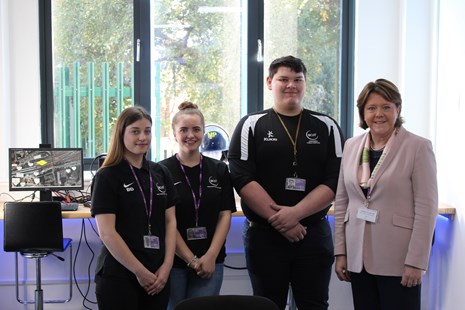 At a separate visit to BCoT’s campus on Worting Road, the Rt Hon Maria Miller MP was also invited to discuss the issues raised by the Colleges Week initiative, meet students and see two of the college’s latest investments to improve student learning experiences which included a new Travel and Tourism cabin crew simulator room and a major incident operations room designed for Uniformed Public Services students to learn how the UK’s emergency services manage and respond to major incidents.
David Hughes, Chief Executive, Association of Colleges, concludes: “Every single day colleges like Basingstoke College of Technology provide a world class education and transform the lives of millions of people. Colleges Week is an opportunity to celebrate the brilliant things that go on and a chance to showcase the brilliant staff that make it possible. It is simple, if we want a world-class education system then we need to properly invest in it.”