Staff and students at BCoT have been marking the 100th anniversary of the Armistice. 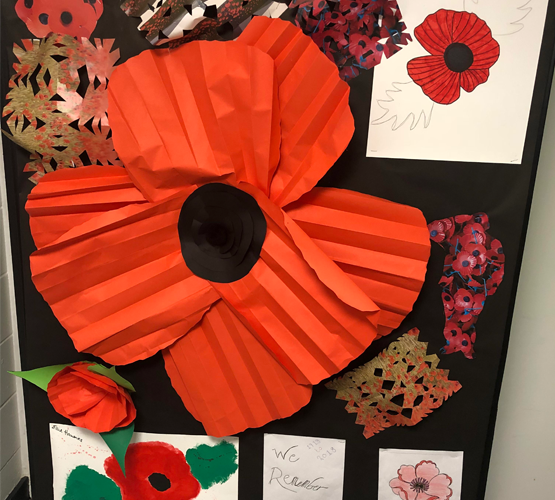 Ahead of Remembrance Sunday, staff and students at Basingstoke College of Technology (BCoT) have been marking the 100th anniversary of the Armistice with a week of commemorative activities across the curriculum.

On Saturday 3 November, a Thornycroft vehicle visited the college as part of a commemorative journey from Hook to Whitchurch to celebrate the history of the First World War across the borough of Basingstoke. The war time military vehicles were once manufactured on the site of the college campus.

The vehicle then travelled to Morrisons on Worting Road, where BCoT staff and students helped the Mayor of Basingstoke and Deane to load 64 OXO cubes into a military shell to remember 64 Whitchurch men who were killed in the First World War. The OXO cubes were used as part of a display in The Longmeadow Sports and Social Club where a special wartime lunch menu, created by BCoT students, was served.

In college, Specialist Provision students created and displayed a mosaic of their own poppies and Public Services students visited the National War Museum. They also collected for the annual Poppy Appeal at Asda in Brighton Hill, Festival Place and The Malls as well as helping 84-year-old Maurice Bastable who served with the Coldstream Guards to raise further funds following the theft of his collection boxes.

The Restaurant at BCoT are holding a dinner to remember the end of the First World War. Diners were treated to entertainment from The Royal British Legion Corps Marching Band and enjoyed a tasty war time menu prepared and presented by the college’s Hospitality and Catering students. The Evolve Hair and Beauty Salon also donated £5 from every manicure and pedicure treatment given on Monday 5 November to the Royal British Legion.

The Sports Department is hosting a Charity Football Tournament at Basingstoke Sports Centre on Friday 9 November from 12.15pm to 2.30pm with all proceeds also going to the Royal British Legion. Art and Design students are producing a commemorative outdoor art project and Automotive students will be welcoming vintage war time vehicles and veterans to the college on Thursday 8 November.

BCoT Principal Anthony Bravo said: “We wanted to acknowledge our roots and commemorate the fallen on this special occasion. Our curriculum staff were all tasked with integrating a WW1 activity into their lessons to mark the centenary and make it an interesting point for students. I’m really proud of how everyone has got involved to support this and I hope the students have enjoyed it”.