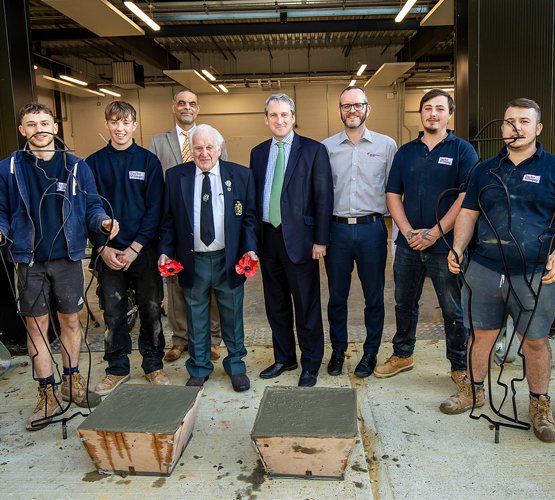 Students at Basingstoke College of Technology’s (BCoT) Future Skills Centre (FSC) in Bordon have teamed up with a local Bordon resident to pay tribute to the fallen soldiers of the First World War.

To commemorate the First World War centenary, Mr Chescoe has created a series of life-sized metal outline figures of soldiers by hand, which have been installed throughout Bordon town centre.

Brickwork apprentices currently studying at the FSC, which recently celebrated its one-year anniversary, have utilised their work experience and enrichment hours to contribute to the project. The apprentices, currently employed by housebuilding giants Taylor Wimpey, built and filled the bases that the figures now stand in.

Damian Hinds, MP for East Hampshire and Secretary of State for Education, praised the project at a recent visit to the FSC as part of Colleges Week, a national campaign which highlights the work colleges do in a bid for fairer funding. Speaking about the visit and the commemorative project, Damian Hinds MP said:

“It’s a real pleasure to be back at the Future Skills Centre to celebrate its first anniversary, particularly during Colleges Week. Our schools and colleges have such a vital role to play in making sure people of all ages have the skills they need to get on in life, and the specialist construction courses available at the centre are just one of the wide range of opportunities on offer locally.

I was delighted to also see the work being done to support the commemorative WW1 project underway in Whitehill and Bordon and I look forward to seeing the evocative figure I saw in situ in the next few weeks.”

Anthony Bravo, Principal of BCoT, added: “We are incredibly proud that our students wanted to support the local community in this moving and important project to commemorate the end of the First World War. It is an exciting opportunity for our students to put the skills and knowledge they have learned into practice, and contribute to the continued regeneration of Whitehill and Bordon.”

Opened in September 2017, the Future Skills Centre in Bordon is a £3.8million facility that offers a wide range of specialist construction courses, designed to meet the needs of employers in the construction industry. Surrounded by the regeneration of Bordon and Whitehill, the Centre gives students the chance to contribute to ‘the town that builds itself’.