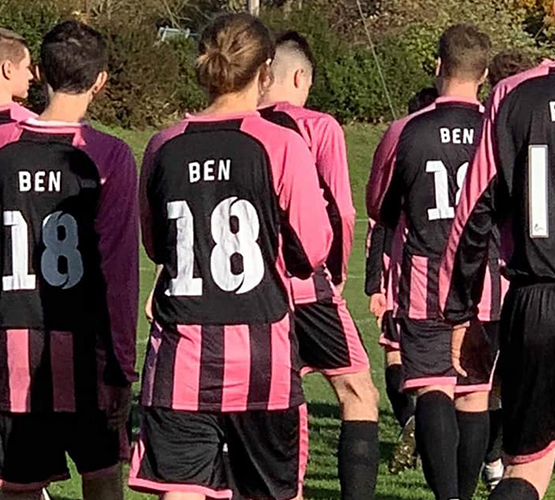 Students and staff from Basingstoke College of Technology (BCoT) supported a memorial football match at Overton Youth Football Club on Sunday 11 November, to commemorate the life of 18-year-old Ben Wilson.

Ben who lived in Overton and was a newly enrolled barbering student at the college, was killed in a tragic road accident on Saturday 15 September 2018.

The event raised more than £6,000 for St John’s Ambulance. The charity, chosen by Ben’s family, was selected after it emerged that a member of the St John’s team gave Ben initial treatment at the scene of the accident. It’s hoped that the money raised will be used to teach basic first aid to young people.

Staff and students from BCoT’s Hospitality and Catering department provided hot food at the event and the college’s Mike Taylor Barbering Academy coordinated a charity head shave. The college also donated a number of prizes for the raffle.

There was a cake sale, live music and Mike Bushell, from BBC Breakfast News, attended as a special guest of the family.

Julie Dodd, member of Overton Village Committee and Business Trainer at BCoT, helped organise the event and said: “It was such an amazing day with an incredible turn out. Everyone came out to show their support for Ben’s family and as well as the match, there was lots going on. From the raffle, to head shaving, it was just such an incredible atmosphere.”

Anthony Bravo, Principal of BCoT, added: “We were all extremely sad to hear the news of Ben’s passing and as a college we wanted to do all we could to remember and celebrate Ben, who was just at the beginning of his time studying at BCoT.”

To ensure Ben’s memory lives on, hundreds of ‘Hearts for Ben’ stones brightly coloured with hearts and Ben’s name will be placed around the world in the hope that others will find them.