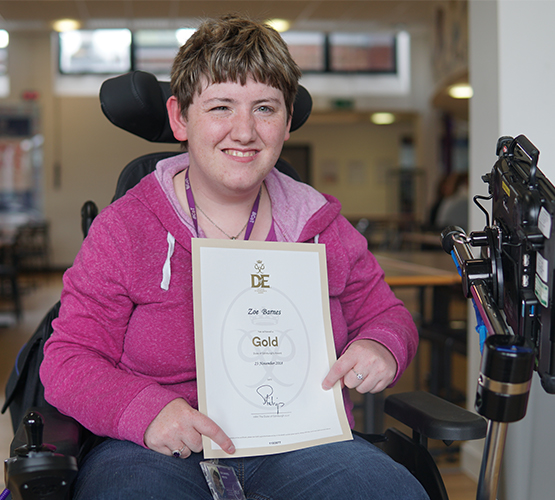 An award-winning Basingstoke College of Technology (BCoT) student met both royalty and a member of her favourite pop group on the same day.

Sports student Zoe Barnes was invited to attend Buckingham Palace earlier this month to collect her Gold Duke of Edinburgh (DofE) Award and had the opportunity to meet the Earl of Wessex as well as former royal correspondent Jenni Bond and one of the former members of JLS, Marvin Humes.

The 22-year-old said: “The day was amazing. I had the opportunity to go into the gardens and it was so fun. There were so many rules though so I felt extra special to be where most people are not allowed. I met so many people but my favourite was meeting Marvin Humes from JLS as they’re my all-time favourite group.”

Zoe has cerebral palsy and uses a power wheelchair. She first joined BCoT in September 2018, her first ever mainstream educational placement.

“I wanted to study sport and BCoT was the nearest college that could help accommodate me with my disability. I have always had an interest in sport, which originally started from my previous college where I used to play Boccia. The coach there was also the coach for the GB team.

“Everyone has been great since I have arrived I have really felt part of the group. Since joining I’ve also become the Disability Officer for the college’s Student Union.”

Zoe has also been invited to the Great Hall in Winchester next month to attend the Hampshire Duke of Edinburgh Presentation for those in the county who have completed the gold award.