Battle of Britain boogie brings the house down

Residents from Sovereign House celebrate the 75th anniversary of the Battle of Britain. 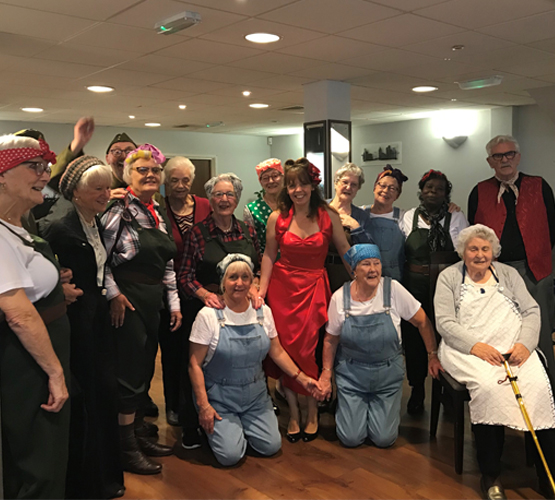 Residents and employees from Sovereign Housing Association dressed up to the nines recently in war-time gear to celebrate the 75th anniversary of the Battle of Britain.

Landgirls and military men sat down to a slap lunch of soup, steak and kidney pudding or ‘Lord Walton pie’, with marmalade bread and butter pudding or ‘war cake’ for afters, thanks to the hard work of hospitality students from Basingstoke College of Technology (BCoT).

The tasty food was followed by entertainment for the 45 guests, by Amanda Parsons, who sang a range of forties and fifties favourites including ‘Boogie Woogie Bugle Boy’ and ‘Up to the Bar’. Many of the residents were up and dancing.

Joan Pink (nee Fisher), aged 87, recalled her younger sister being born during the war and the bombs falling on Church Square and taking all the houses out. Joan was just seven years old when the war started and aged 13 when it ended.

She said: “I was borne in Basingstoke and always lived here. We used to go to school in the afternoon and in the morning the evacuees went to school. If we didn’t have our gas masks we were sent home to get them!”

Tracey Scutter, Wellbeing Officer for Sovereign, said: “We’ve really enjoyed getting involved with this lunch. Our residents chose the theme and we worked with the college to try and pick dishes and music that really brought back memories. It’s been a lovely afternoon, and both generations have really enjoyed themselves.”

Sovereign and BCoT have been working together for the past two years and have previously hosted a Christmas and Caribbean themed lunch for older people.

Principal of BCoT, Anthony Bravo, said: “We were delighted to welcome Sovereign Housing Association to The Restaurant at BCoT once again. This special event was a fantastic opportunity for our hospitality and catering students to prepare and serve some of Britain’s most unique and cherished dishes. I would like to thank Sovereign Housing Association and everybody who attended for supporting The Restaurant at BCoT.”