BCoT held a General Election Q&A for students and staff. 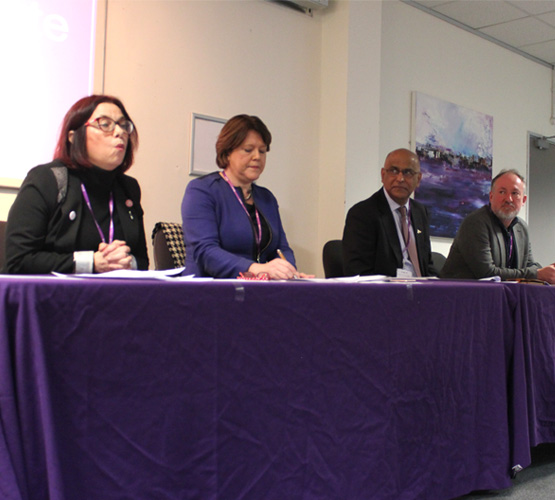 On Wednesday 4 December, BCoT held a General Election Q&A for students and staff. You can watch it below.

Matthew Farmer from the Basingstoke Gazette wrote the following article on the event:

All of Basingstoke's options for MP, except Jonathan Jenkin, of the Green Party, gathered to answer questions from Basingstoke College of Technology (BCoT) students.

Questions on drug use, education and pay for young people were selected, and students also asked about budgets and policing.

Speakers disagreed on the levels of policing needed, and whether new police officers would make up for those previously cut by the Conservative and Liberal Democrat coalition.

Sashi Mylvaganam of the Liberal Democrats joked about saving people from trying to pronounce his surname, but pointed to the Conservatives for cutting police numbers.

Kerena Marchant of Labour said the current formula for deciding where new police go was unfair as it was set in London.

Brexit was raised by Maria Miller, who said "I think people are sick to the back teeth of elections. We want to put Brexit behind us and get on with other things."

Mr Mylvaganam pointed out negotiations would continue long after a deal is reached.

He then claimed: "We are going to have lorries queueing on motorways, and whatever happens, there will be riots, because half of the population will be angry."

Alan Stone, standing independently, said the other candidates' discussion of it was causing people to lose trust in politics.

He said: "What the others have said is all scaremongering. We survived before the EU, and we can again."

At the close of the session, all used their closing speeches to encourage young people to be more involved in politics.

Mr Stone, Independent: “Local politics is easy to get involved with, and has a lot of decent people who aren't paid much for what they do.

“If you can’t find a party you like, stand as an independent. You might not win, but it does mean you do get in front of a lot of people to tell them what you think.”

Mrs Miller told students to go online and petition online for more female MPs. She said: “When I was elected, I was the 265th woman ever, which shocked me.

"I want you all to go on websites like Ask Her to Stand, and encourage more women into politics.”

Mrs Marchant said: "This is one election that matters. If you can't vote, let your parents know how you would vote."

Mr Mylvaganam said young voters should look to his party as one that works for young people, and to ignore parties 'full of old men'.

Mrs Miller interrupted his speech to highlight the recent female Prime Minister, saying 'so it can't all be old men!'.

Anthony Bravo, Principal at BCoT, introduced the hustings and helped students understand the matters being discussed.

He said: “It is really important that BCoT plays a role in helping our students feel informed about the upcoming general election.

"It was a pleasure to host this and I would like to thank all of the candidates for attending and answering the questions posed.”