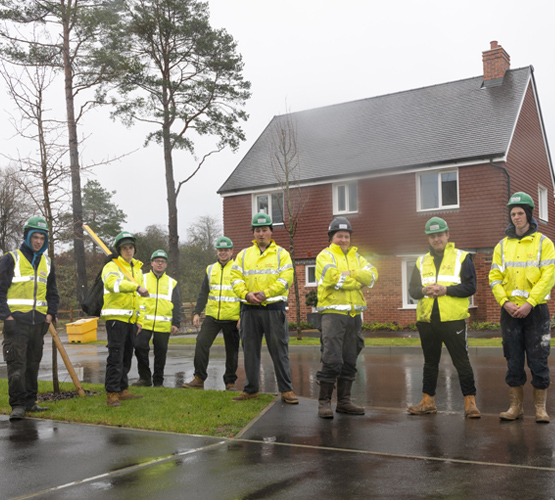 Housebuilder Taylor Wimpey and Dorchester Regeneration, and the Future Skills Centre are working together to develop young apprentice housebuilders, during a time when the housing industry is suffering from a skills shortage.

The five first-year apprentices are a group of young individuals, aged 17 to 21. They have collectively built two houses, three garden walls - two of which had curves in them, and four garage gables.

They are learning the trade of bricklaying on site at Taylor Wimpey's Dukes Quarter development, under the supervision of Master Tradesman, Donal Looney, whilst studying one day per week at the Future Skills Centre.

"As the Project Manager of Taylor Wimpey Dukes Quarter, I am very proud to have the apprentices working on my development, watching them learn skills that they will have for the rest of their lives, and to see the improvements monthly. What they have achieved in such a short period of time is impressive, says Ivor Richards, Project Manager, Taylor Wimpey.

He continued: "This group of young apprentices have been a credit to themselves. What they have achieved in one year is testimony to the hard work of everyone involved. I look forward to the next intake of apprentices and growing this young team."

The apprentices have worked in testing conditions, from 40c in the summer to minus three in the winter, as well as taking on the pressure of completing their work to the standard expected by Taylor Wimpey and the National House Building Council.

“This fantastic partnership between Taylor Wimpey and the Future Skills Centre is providing young people with the opportunity to learn new skills and work locally to where they live. They will know that they have had a direct impact on the development of the town, and they should be proud of that. We will be creating more jobs for local people in the heart of the town and at Longmoor, with the new town centre expected to create circa 3,000 new jobs.”