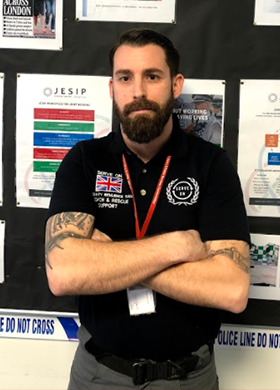 We try to ensure our curriculum has a mix of practical and theory to give the students the best college experience possible.

What previous experience do you have in the Public Service Sector?

I served for 14 years within the British Army serving in both the Royal Artillery and the infantry as a Grenadier Guard, where I performed ceremonial duties such as changing of the Guard at Her Majesty's Royal Palaces. I have also been deployed on operations in Iraq, Afghanistan, and with the United Nations in Cyprus UNFICYP.  During my career I completed two years as a recruit training instructor at the Royal School of Artillery, where I trained soldiers in their second phase of training in basic close combat skills. Upon leaving the British Army, I worked in private security as a Security Risk Management Consultant before pursuing a career in teaching.

What do you love about teaching at BCoT?

I love the positive impact that I can have on young people, supporting them in forging careers and I also love seeing former students that I have taught become trained public service personnel.

What are you currently doing outside BCoT?

I am currently volunteering in a number of different organisations that allows me to keep contributing to society and help people. I recently got involved with a disaster response organisation called Team Rubicon which is a predominantly veteran based organisation that supports those in need due to the likes of a natural disaster such as Hurricane Irma in the Caribbean. I have also joined Serve On community resilience team CRT which is a search and rescue organisation that specialises in roles such as swift water and flood rescue within the United Kingdom. Serve On has proven to be a fantastic organisation to get involved with and the sense of community spirit and values has been second to none. During my time with organisations such as Serve On I have met some amazing people and look forward to gaining experience from them which I can put straight back into the classroom.

Basingstoke College of Technology I 2019